Posted on November 17, 2013 by suzanneandtom

Autumn in Georgia is deceptive.  It can move from being summer-hot and sticky to fall rains and chill.  Even into November we can have mild days but always with the threat of needing a heavy coat in the evening hours. This first picture is a good example of people enjoying the beach in mid-September and many of the concession stands on the “boulevard” still open for business.

The Black Sea beach in Batumi on a beautiful, early September day.

Time to make some changes in the house!

Putting an extension on to the small kitchen area .

The kitchen underwent some expansion starting in September. Two construction workers were employed to break out a wall and add 10 feet to the existing small room.  The turmoil of this project was felt throughout the house (except our room upstairs) as furniture and rugs were moved and who knew where you would be sitting for your next meal?  Luckily, everyone took it in their stride and accepted the upheaval.  The workers were fed generously by our host family and we often sat at table with them.  This  is the “Georgian” way to treat workers in your home (as well as any and all visitors).

Waiting in the morning crowd to pass through customs into Turkey to shop at the Hopa bazaar. We didn’t make it as no one told us we needed a Visa! We’ll try again.

We finally found a Saturday when we could go to the Hopa bazaar in Turkey with our host ‘son’ Aleko.  We boarded the crowded bus for the 10 minute bus ride to Sarpi, the border city, where we fell into step among this crowd.  After about 20-25 minutes of moving slowly forward we reached a point where we were asked for our Visas!  What???  No one told us we needed a Visa!  At that point, we separated from Aleko to go home while he continued his journey to find his treasured items.  Who knows when we will attempt to go again but now we  have our Visas and are ready when the time comes.

A mighty storm brought this trauma to our house. 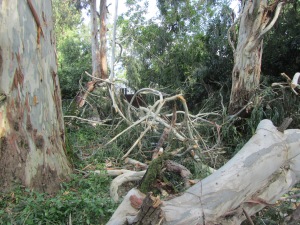 Eucalyptus trees devastated by a storm in front of our house and damaging a neighbor’s property.

Clearing the dirt road in front of our house after the storm which harmed several enormous eucalyptus trees.

We were awakened by a furious storm during the night but not until the morning did we see the destruction outside.  Several of the huge Eucalyptus trees on our host family’s property had lost very large branches which broke part of a neighbors wrought-iron fence and gate.  It also completely blocked the small road which went past the houses to the fields.  Nodar was away on ambulance duty that night and Mari was the first to start clearing the space.  Family visitors from the Ukraine who were visiting rolled up their sleeves as well as a few other workers (like Suzanne).  It took a good two days to clear the road so a car could get through.  The wood was stacked and subsequently cut to be put in the wood shed for the petchi.  (Eucalyptus trees are common here and grow to several hundred feet which these were.  Eucalyptus need a lot of moisture so combined with our sub-tropical climate they grow well here.)

By September, gathering wood for the coming winter is almost too late.  Most folks start that process earlier. However, if you are just going to buy it, instead of doing your own chopping, you can find it in abundance along this street where truckloads are stacked every day.

The gathering of wood for winter heating on a major street in Batumi not far from Tom’s workplace.
Typical apartment buildings in the background with their wash hung out to dry.

In the background you also see one of the tall, Russian built apartments so prevalent in Batumi.  And here is another just feet from a very congested intersection with no traffic lights.  Not many play areas for the little ones or the teens.

October storm clouds blocking the sunset over the Black Sea.

An October sunset over the Black Sea.

Sunsets will be one of our fondest memories especially as we viewed them by the Black Sea.  Here is the contrast of a brilliant evening sunset with one that is awesome and threatening a storm.  Walking the rocky beach at night is always a relaxing and reflective time. 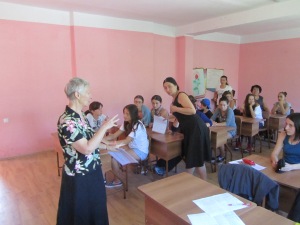 Suzanne doing a presentation on the National English Spelling Competition at a school in Kobuleti.

The NESC (National English Spelling Competition) is in its 2nd year having been started last year by a most clever and original PCV, Adam.  In this picture I am preparing students and teachers at a school in Kobuleti with the rules for this competition. I am the Regional coordinator for the Ajara region schools and this was one of my duties.  The Georgian students LOVE competition of most any kind and spelling is no exception!  We’ve had a big increase in schools that are participating this year.  Round 2 is in December and the final round in March. That will take place in Tbilisi, the capital.

Getting ready for the National English Spelling Competition…first round in the local school.

This is one group of students in my school getting ready for the first round competition.  One of my counterpart teachers, Neli, is standing in the back of the room.

A ride on the newly built Gondola in Batumi which allows a full view of the city at the top.

One of the newest “things to do” in Batumi is a Gondola ride up the mountain for a full view of the city. Tom and I took this ride on a nice sunny day in October. A few weeks later, Tom took our host brother, Aleko, up for a ride. Eliso, our host sister, preferred not to go.

Looking down the street from Heroes Monument toward the snow-capped Caucasus! Notice the lovely palm tree on the new boulevard. They grow quickly in this sub-tropical climate.

This is a view of the snow-capped Southern Caucasus seen from one of the wide boulevards in Batumi.  An awesome, beautiful site in mid-October.  In contrast  you see me walking to school from our house after a heavy rainfall.  The dirt road has no drainage and you must maneuver carefully to get through with dry feet.  I consider my ‘duck’ shoes as one of the most valuable items I brought with me to Georgia.

Suzanne off to school on the dirt road off the highway. It had rained as you can see and there is no drainage for the water.

(2603/2608) Halloween isn’t celebrated in Georgia but the more the kids hear about it, the more they want to have fun with it.  So these pictures are from a presentation I did in the Batumi American Corners library to talk about the holiday and have also have some fun.

Salome did a wonderful job decorating the Library for Halloween.

Halloween “mummies” at the American Corner’s Library! What a great time they had

When I arrived there was already some serious face painting  going on.  We played some fun games, had them taste some “candy corn” and ended the day with a contest to make mummies with the rough, brown toilet paper used here.  There was unanimous fun that day!

Some costumed girls at the Halloween party for the 11th grade. 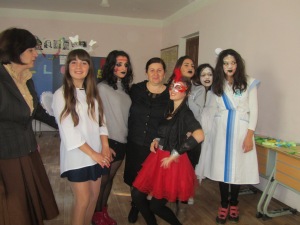 Halloween with some students and two teachers!

More Halloween antics at my school where they had a party that was  mostly girls and didn’t have any food!  Throwing a party needs some work here, I think, but everyone did enjoy some fun!

As you all know by now, Turkey is our southern border (mostly) and as a result there is a percentage of Muslim folks who have flowed over into Georgia and especially into our small village of Gonio.  One day a few weeks back I was told that the Muslim children wouldn’t be in class the next Monday because of the holiday of Eid Al-Adha.  On this day, many families will slaughter a sheep for their celebration. This picture is our neighbors home where they are following this tradition.  Tom took the picture….naturally.

Our neighbors celebrating the Muslim holiday of Eid Al-Adha by killng a lamb for the evening feast.

Last but not least,

Tom opens a goodie box from friends in the USA. Maybe we shared some?

here is Tom opening and examining a “goodie” box from our dear friends in Aurora, Colorado.  They know us well and included items we like but that are unavailable anywhere in Georgia.  These boxes receive great reverence and the contents are used with some solemnity due to the love that sent them.  We even dubbed them “the love boxes”.

We close this post with a short video where Suzanne is walking from our house out to the main road.  You can see what a mess we have when it rains!

3 thoughts on “Bits and Pieces”