What happened to July?

Posted on August 5, 2013 by suzanneandtom

It’s hard to believe that July has come and gone.  It felt like only yesterday Tom was in Khashuri, on July 1st, participating in a discussion panel with the new G13s  during their Pre-Service Training.  Then, very quickly we were both in Tbilisi, July 15th, attending their Swearing-In ceremony and wishing them luck in their new assignments. We followed this with a gathering of members of our own G-12 group to celebrate our 1st year of service.  It was a memorable day all around.

Group 13 and their program managers.

Those brave souls who made it to the one year gathering plus Sarah’s brother.

Suzanne and Tom at our one year celebration.

During the first weeks of July, Suzanne had the opportunity to teach English conversation at a private English school in Batumi.  This was a great experience and very different from her normal public school.

One of two summer English classes Suzanne taught in Batumi. 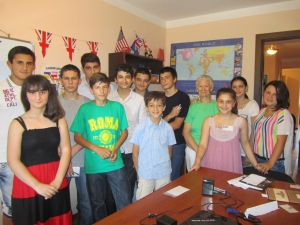 The second of two English classes Suzanne taught in Batumi.

Well back to our story.  No sooner had we gotten back to Gonio when Tom chipped a front tooth.  He was not sure how serious it was and was going to let it wait for our dental check-ups in September but our Peace Corps doctors insisted he have it taken care of ASAP.  So we were barely home one week when we were off to Tbilisi again.  Good thing too as the tooth needed more than just a polishing. 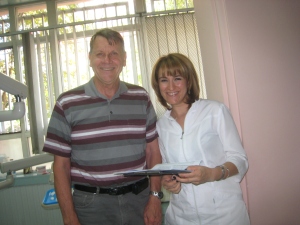 Tom and his new friend the dentist after she fixed his chipped tooth.

Suzanne tagged along for the dental visit, (she really loves the dentist, NOT)!  She came because Stephen, our youngest son, decided he could swing by for a short visit after he finished up some work in Geneva.  This was a nice surprise and we were really looking forward to his visit.

Stephen in Batumi by the Black Sea.

Several years ago Stephen was in Georgia along with Dana and he was looking forward to seeing the Western side of this country.  During his first visit their time was spent in the East in the regions near Tbilisi.  Stephen also wanted to re-connect with several graduate school colleagues he met and befriended when studying at the Central European University in Budapest.  So to say the least his days here would be filled.

We met Stephen at the Tbilisi airport at 3:30 AM on Saturday July 27th, took a cab to the Peace Corps office and stayed there until 6 AM when we left to catch the 7 AM train to Batumi.  We talked a lot and tried to sleep some but the excitement of having him here did not help us to sleep.  These were the first 2 of 4 train rides for us in just 4 days…..a plan we hope not to ever repeat.

We arrived at our village about 1:30, got Stephen settled and had a meal with members of our host family.  Our host dad was off on ambulance duty and could not join us until the next day.  The rest of Saturday was spent walking around our village and our sea-side boulevard.

That night and a good part of Sunday it rained and rained and rained.  This allowed us to have much-needed naps and some quality time with our son.  Stephen was also able to do some of his work.  Later in the day the rained stopped and we took a quick trip to Sarpi at the Georgian border with Turkey and  then visited the Gonio fortress just a short distance from our house.  Here is a link to information about this historic site which you might find interesting:

That evening we were on the night train back to the capital.  We had a cabin with 4 berths and the youngest member of the family got the top bunk.  After a very relaxing breakfast at the Holiday Inn (a lovely treat) we were guides showing Stephen some of the fun spots of Tbilisi.  These included the Funicular ride up to the top of the city and a Ferris wheel ride with spectacular sights of the city.  Our next meal was Georgian food across the street from the PC office.  One of our PC staff, Sue Miller, had worked with Stephen many years ago in Washington and this was a reunion of sorts which we were glad to arrange.  Delicious food, good conversation and friendship….you just can’t ask for more.  Then in a short while, Stephen’s friend Otar arrived to take him for the evening to share with mutual friends from their Budapest days.  A quick good-bye and he was gone while we began our trek back to the train station for our trip home.  A surprise awaited us as Tom’s Director, Levan, was sitting right behind us!

Stephen gets the upper berth on the train ride to Tbilisi.

Suzanne takes the lower berth on the train ride to Tbilisi. 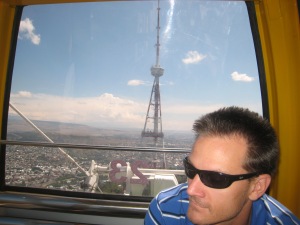 On the Ferris Wheel high above Tbilisi.

July is birthday month not only for Tom but also our host dad, Nodar.  This was appropriately celebrated with the host family. 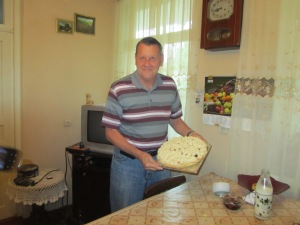 Tom and host dad Nodar. Nodar’s birthday was July 23rd so he and Tom celebrated together.

July also found the two of use traveling to our PST site, Telavi, and a quick visit with our PST host family.  It was a good and happy visit but all to short.

With our PST host mom, Nana and Bebia Zizi in Telavi, Georgia

Our PST host sister Nino on the right with her sister Sopo and brother Zura in Telavi, Georgia

American Corners, a part of the Batumi Library and sponsored by the U.S. Embassy is a place we visit often and occasionally offer insights to American life.  Suzanne gave a presentation about our Independence Day celebrations to a very interested group of Georgian Youth.

The month ended with us being a part of  “Culture in the States”, another U. S. Embassy sponsored initiative to share American ways with Georgians.  We opted for an American BBQ and are proud to say it was a great success.  To help us out we got the local McDonalds to donate the hamburger buns and patties while we supplied the fixings. 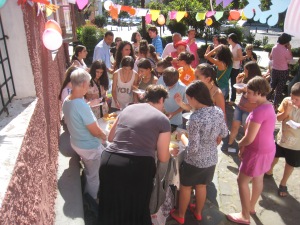 More fun at the summer BBQ.

We even made it on the local television nightly news!

All in all July was a very busy but fulfilling month and we hope the next 11 will be the same.